Archive for the tag “birthday feast”

A feast of birthdays or a birthday feast?

I haven’t written for a long time (clearly). Since my close encounter with rock stardom, as described in my last entry, Liam has turned nine years old and we celebrated for what seemed like about a week, although it was really only three days.

The Monday of his actual birthday was a public holiday, so we were able to go out for sushi as a family (the sushi was the birthday boy’s request). I am always so proud when my children use their chopsticks. Such little sophisticates!

On Tuesday, I took a day’s leave and the boys and I went off to Bambanani, where the little gourmands then chose to tuck into spare ribs.

Wednesday was the really big day: another day’s leave for me and I took five little boys to the games arcade and then a third birthday meal. It was a bit like herding cats, only significantly more difficult.

Imagine: I stayed cool, calm and collected throughout. My occasional alter-ego, Shouting Mommy, was nowhere to be found. I am quite proud of this.

But it was worth every moment, not to mention every rand spent on every ride and electronic diversion. I have never seen such joy on a child’s face as when my birthday boy and his friends came off what I can only describe as the ‘disco-ball bumper cars ride’.

For this, you must imagine five little boys riding around on circular hovercrafts, complete with their own individual controls that could move the hovercrafts not only in any desired trajectory, but which could also make them spin on their own axes. 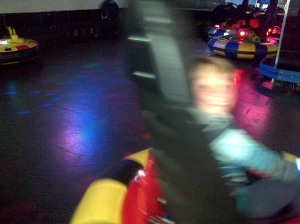 Add in flashing lights on the floor and loud music, as well as the stated purpose of barging into all your friends as often as possible for five whole minutes, and you can imagine the delighted squeals and giggles.

Little boys, when given access to a collective hearts’ desire like this, do indeed giggle and squeal.

I am stating this for the record while my boys are nine and six, and plan to remind them of this fact should they get uppity with me in the future, after their voices have broken and they’ve started shaving.

But back to when Liam turned nine.

Restaurant-wise, the children then deigned to lower their standards a tiny bit and we hit the Spur for a late lunch/early supper, where burgers were the order of the day.

At this point, I’d invited my friend Anne to join me in a glass or two of wine. She accepted my invitation most graciously – even though it was the Spur, where the waiters break out into odd line dances around the restaurant from time to time – for which I was very grateful. I was starting to feel Shouting Mommy stirring in her sleep and I wanted to keep her in her box for the day and not come out and spoil things.

And on Thursday, with the three-day birthday celebration over, I went back to work for a comparative rest. But the look on my little birthday boy’s face will stay with me for a long time.

Now, if I could only work shorter days and spend more time with my children and more time writing… that would be a dream come true.

Working on it, dear readers. It’s in the three-year plan.