Archive for the tag “flower power”

Be sure to wear some flowers in your hair

My husband found an old photo of himself the other day. He was – I’m guessing – about 26 at the time, and, I thought, absolutely gorgeous.

In the photo – which is sepia-coloured, to add to its nostalgic charm – he has long blonde hair with a bandanna tied around it. He’s wearing a flowing shirt and, around his neck, an amulet on a rope. He looks like someone straight out of the sixties.

As I initially digested the photo, remembering the Frank I’d first met – though not the Frank I’d first dated, because by then he’d cut his hair – I wished for a brief intense moment that he’d still looked like that when he and I were first sharing our lives.

In my younger years I was often a sucker for a man with long hair. I think it’s my yearning-for-the-sixties thing. I’ve always liked the idea of the flower power movement and that tipping point when the western world, for a short while, was less materialistic and young adults yearned for peace on a global scale.

(Note to cynics: no. It’s not about the sex and drugs, though I’ll surely subscribe to the rock and roll.)

I was lucky enough to work in California for a few months. I had my 27th birthday there. When I visited San Francisco’s Haight-Ashbury district (‘The Haight’) and walked the beautiful Golden Gate bridge, I felt that I should have been surrounded by long-haired ‘gentle people’ in flowing shirts and bell-bottomed jeans, strumming guitars and reminding me to wear flowers in my hair.

“If you’re going to San Francisco

Be sure to wear some flowers in your hair.

If you’re going to San Francisco

I heard the theme music everywhere I walked, and as a souvenir of my ‘California dreaming’ I got my belly button pierced in Haight Ashbury when I’d finished my temporary three-month job. Then I hopped on a Greyhound and travelled around the country for a few amazing weeks before finally going home to South Africa and the end of my American sabbatical.

I didn’t know it then but I was going home to a future that would include a gentle man who, in his early twenties, had sung and played the guitar in a pub. This was also the time he was growing out his hair and, with it, some of his memories of the war in which for two years he’d been a reluctant teenaged conscript.

We met years later and of course began sharing some of our stories – a necessary part of early dating, I think, before a new couple starts making their own memories together. But it’s crossed my mind on more than one occasion to be jealous that we didn’t know each other earlier in our lives.

I have wished that I knew the Frank with long hair.

I have wished that he knew me for more years with the body that was mine in my youth.

I have wished that we both knew each other when the wrinkles were fewer and the cynicism less.

When the background notes to life were more about music and less about money worries. When there seemed to be more time for fun.

I have been jealous of the women in his life who had those younger, less troubled, more energetic moments with him. I have mentally wished away the men I wasted my time on before he came. I have wished that we’d had our children together sooner. I’ve told him all of this. His response?

“I was too full of kak when I was younger,” he told me. “I would have ruined it with my issues.”

Yes, but that long hair.

The music in your fingers that you release only seldom, now.

“And you,” I have told him mournfully, “could have known me with a better body for more years than you did!”

And he has reminded me that he knew the body that grew our two children. Which is logic that you simply cannot argue with, damn it. (Although the slimming efforts do continue unabated.)

And so I am okay with not knowing – and loving – the Frank who had the long hair.

Instead, I got the man who grew more gentle. 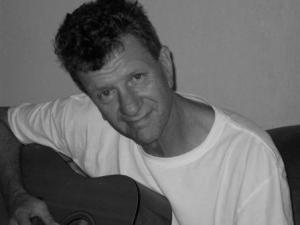 I think we must go to San Francisco together one day. I will wear a flower in my hair, and find a bandanna for his as we walk across the Golden Gate bridge. It doesn’t even matter if it’s short hair and not long.

And I think most people who see us will get it, and smile.