Archive for the tag “iTV”

And on a lighter note… over to my mother

There was some big news going on in South Africa last week (6 to 10 February 2017). We are, as some people have said in the media, a ‘noisy democracy’.

In sport and popular culture circles, there was the death of Springbok rugby hero Joost van der Westhuizen on Monday after his six-year fight against Motor Neuron Disease, and then the build-up to his memorial service and provincial official funeral at Loftus Versveld Rugby Stadium on Friday.

South Africans around the world were invited to wear the green and gold Springbok colours in his memory, and depending on where you were, where you worked and even where your children went to school, I think the call was quite well heeded. 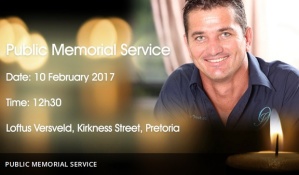 In the political arena, there was the annual State of the Nation (SONA) address in Parliament in Cape Town by the country’s president on Thursday night. The State of the Nation tables a programme of action for the year and accounts for progress in the commitments made the previous February.

The fact that the Presidency announced the deployment of 441 soldiers in Cape Town during this time to ‘help police maintain law and order’ during the opening of parliament caused a great deal of anger. It brought everyone’s attention right back to the scenes in Parliament during the 2015 State of the Nation address that made the famously robust debates of the British Parliament (which I like watching from time to time) look like a kindergarten jelly-and-ice-cream party in comparison. So the general consensus was that our president was running a bit scared again this year as SONA approached.

And somewhere in the middle of all this, in the financial services sector, South Africa’s biggest – and previously only – stock exchange, the JSE, lost an appeal it had lodged with the Financial Services Board around issues it had raised against the granting of a licence to a new competitor.

Oh yes, and on the international news front, don’t get me started on the separate announcements by first Beyonce and JZ, and then Amal and George, about their pregnancies with twins, all right? I’ll just let the internet deal with that one. 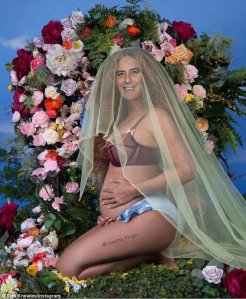 And so when Friday finally arrived, I greeted it with an enormous sense of relief. I felt just a little tired.

We all went to work on Friday morning, of course, in the sad yet not surprised knowledge that the previous night’s SONA had again turned into an absolute farce, with scenes of violence erupting and communications being cut from time to time (real déju vu there). Let me hand over this part of the musings to Marianne Merten of the Daily Maverick, who writes, in admirably crisp prose:

It was a mess. Despite the ring of steel in and around Parliament for President Jacob Zuma’s 2017 State of the Nation, ugly brutal scenes inside building unfolded, again. EFF MPs were evicted by force by men and women dressed in white shirts, same as in 2015. The pursuit continued by police in body armour, riot shields and helmets in the precinct outside, but was short-lived. The DA walked out of the House. This was a re-run of the SONAs past and yet another ugly display of force in the people’s house.

…Inside the House, Zuma was told to start – “Finally” he said before his inimitable brief giggle.”

And so it was, once again, a farce of a Parliamentary affair in South Africa. I’m not sure, myself, what the official SONA speech actually said. I really haven’t been able to bring myself to read it yet. I mean, in the context of the above, does it actually matter what our esteemed pres actually said? I mean, he began his speech with his ‘inimitable brief giggle’, after all.

So by the time it came Friday evening, I was mentally and emotionally tired. Where, I wondered, was the joy? It was all getting a bit heavy.

I left work a little earlier than usual and went to fetch my children from my mom. I hadn’t seen her for a few days, as the children’s dad had been doing the evening parenting run this week while I was on the morning school-run shift. So my mom and I sat down at the dining room table for a short while, and I prepared myself for a nice little catch up of her week.

“I found myself watching something quite good on television last night,” said my mother, with a little glint in her eye.

“Oh yes?” I said with interest. My mother has never lost touch with her Scottish roots, so I waited to hear about a new BBC or iTV offering, and hoped that I wasn’t going to hear about re-runs of Victoria or Doc Martin – both of which I really enjoyed, the first time around, but I’m looking for something new from the Brits now.

Unless, I thought hopefully, my mother was about to tell me that there was a new series of Doc Martin just arrived? I do love his grumpy outlook on life and his social ineptness. I have days when I aspire to master his breathtaking rudeness. 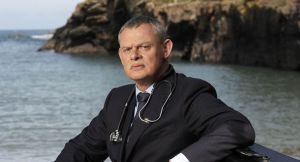 “Yes,” said my mother with a little smirk, clearly enjoying herself. “It made a nice change from my book to watch a bit of TV in the evening again.”

“So what was the name of the programme?”

(Was it or was it not a new series of Doc Martin!)

My mother smirked some more.

This was just a little off-centre and I found myself racking my brains for a nano-second while I thought how progressive the Brits were getting with their entertainment programming. Then my brain caught up a little bit and I found myself saying, rather eruditely under the circumstances, “Er… what?”

“Well,” said my mother, “I thought I would try watching SABC2 for a change and it turned out to be quite good!”

I really was lost way out in left field by now, and so could only reply, rather lost for words, “But you never watch SABC programming – you’re always on British stuff.”

(Yeah, yeah, I know. I was being a bit thick. It had been a long day and a longer week.)

My mother finally relented, this time with a downright cheeky laugh.

“I wanted to see what was going to happen with that State of the Nation Address,” she replied merrily, “and so I tuned into SABC2 to see if he would start his speech on time. And of course he didn’t!”

“Oh,” she continued brightly, in a way that reminded me suddenly of her irreverent Celtic heritage, “it was really rather good. They all started out arguing, and there was lots of usage of the F-word…”

“… and lots of shouting, and the speaker trying to restore order by saying, ‘Honourable Malema! Honourable Malema!’ and then finally the police or the army were there disguised as waiters, and fists were flying and more name calling and eff-ing and blind-ing, and from time to time the communications were cut, and Julius Malema and his EFF, all in their red outfits, were roughed up and escorted out, and then the DA walked out too in protest…!” 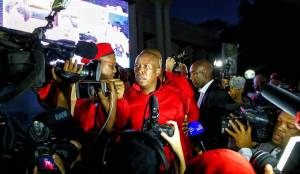 I was quite spellbound. My mother is normally a very good citizen who applauds law and order.

“…and so, all in all, you missed a right good punch-up!” she concluded brightly.

I think I lasted about ten seconds before I found myself weeping with laughter with my head down on the table. I had never quite heard the State of the Nation shenanigans described like this before.

“Of course,” she continued on a more sombre note, “what DOES the rest of the world think about us when they watch it on TV?”

I truly have no real answer for that one. I can only hope that the term ‘noisy democracy’ passes muster for a while longer. Otherwise we must just call it The Julius Malema Show next year, in advance.

But thanks, mom. You made my day!